What Temperature Should A Bain Marie Be? 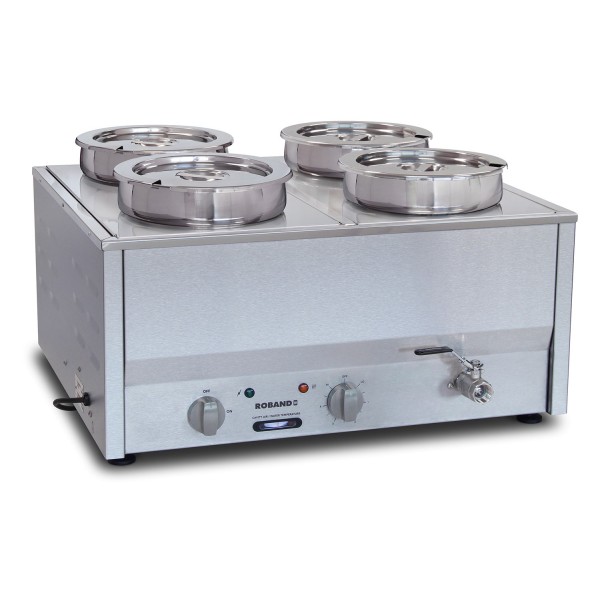 The Bain marie (sometimes written as Bain marie) is a French term for “Mary’s bath.” This Mary, who invented the Bain-marie, is said to have been a medieval alchemist. In simple terms, a Bain marie is a hot water bath used t0 keep food warm or to gently cook delicate foods. In English, a Bain marie often is referred to as a double boiler. Although they operate on similar concepts, they are not exactly the same. In a Bain marie, a lower pan is filled with water, while a slightly small pan is placed into the lower pan in direct contact with the water. Heat is applied to the lower pan, which heats the water, which in turn, heats the upper pan. In a double boiler, the lower pan is filled with water. The upper pan does not come in direct contact with the water. There is an air gap between the two pans. When the water is heated and boiled, the steam rising heats the second pan. A double boiler is used to provide gentle heat to a food. Consequently, less heat is transferred to the second pan by the steam in a double boiler than the second pan in a Bain marie, which is in direct contact with the water. It is often used to melt chocolate. A Bain-marie is used to deliver a uniform, gentle heat to food. This allows for uniform cooking. A Bain-marie also is used to keep cooked food warm, for example, at a buffet.

Many Bain-marie manufacturers recommend using distilled or filtered water to prevent the build up of mineral deposits on the pan. Depending upon the heat source, it can take 15-30 minutes for the water in the Bain-marie to reach the desired temperature. Also, it is important to not fill the water level too high. The water should just touch the bottom of the second pan. If the water is too high, the Bain-marie will not operate as well as it should.

What Temperature Should A Bain Marie Be? January 9, 2020

Why Should You Be Using a Combi-Steam Oven December 15, 2020