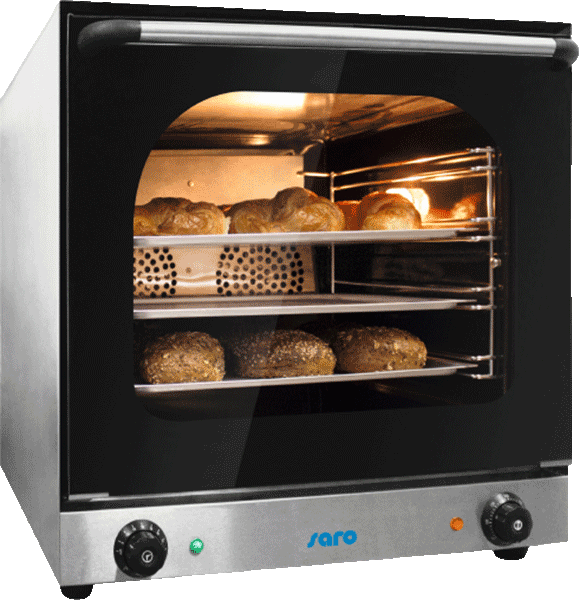 Save time with a commercial electric convection oven. A commercial convection oven use a fan to circulate hot air around the food to cook evenly and consistently. Also make sure to check out our top brands for commercial ovens: Anvil, Turbofan, Waldorf and Turbochef.

What is a convection oven ?

Convection ovens date back to the 1950s where they were popular in the professional kitchens only. Convection ovens have since gained popularity with home cooks who prefer to purchase an oven with a convection setting or go for the compact countertop version. Commercial Kitchen remodelers also go for this type of oven because of its numerous benefits. It is from this information that we ask the most pertinent question, what is a convection oven? A convection oven is a fan-assisted oven uses a fan to circulate hot air around the food so that it can cook consistently. The fan in the convection oven permits the transfer of heat via convective heat transfer. Evenly distributed heat that circulates around the food removes the cover of cooler air that initially surrounded the food when it was first placed inside the oven. This process allows the food to cook quickly at a lower temperature of about 25 to 30degrees as recommended by experts. One can opt to use a higher temperature but will instead shorten the period used for cooking to about a quarter depending on the type of food. All these adjustments are relevant in achieving the desired effect on the food.

These types of ovens are beneficial to every oven user in that they have easy specifications to be followed when using them. We live in a time when where people need an apparatus that cooks food quickly and convection ovens would not have arrived at a better time than this. The oven’s improved energy efficiency is also hard to ignore. The fact that a convection oven has a fan and an exhaust system makes it to stand out from the rest of the other ovens. The internal fan located in the convection oven circulates hot air, which in turn creates an evenly heated environment of food. When cooking, the fan helps to dry out jerky and sliced fruits making them crispy. The radiant heat originating from the top and/or bottom surfaces penetrates the food making it cook faster and making its skin appear uniformly golden brown. As for baked foods, they will appear flakier, soft and light. An important point to note is that the shelf space in the convection oven is massive giving you a chance to place many trays at a go inside the oven. This comes in handy especially during the festivities when you have many guests to serve in a limited period of time. However, you need to be careful not to overload the oven for too many pans inhibit free circulation of air. The best part is that after placing the food inside the oven, you do not have to rotate it every so often because the fan disperses the heat all over it.

To sum up, a commercial convection oven is to die for for every food maniac. One can easily play around with it and the results are shocking in a good way. For the benefit, it is important to keep in mind that a convection oven is only effective when the air circulates well over the food. In this context, it will be important to use trays, baking pans or roasting pans with lower sides to ensure free flow of hot air. When using the convection setting, users should also avoid covering the oven shelves with foils as it prevents the even distribution of air in the oven. Upon purchasing a convection oven, one is guaranteed a long-term use of the kitchen equipment. You will surely fall in love with both the oven and food that comes out of the oven. Read more about our commercial ovens and catering equipment.

What do Petra's customers think?

Thank you to Sam and Paul for all your hard work in our journey involving our shop fit out and equipment supplies. Petra Equipment has a great range of products with competitive prices.

A chill dudea year ago

Such good service! We needed catering equipment for major event at very short notice and the staff at Petra not only made it happen but made it an enjoyable experience in the process.

I just wanted to share my amazing experience with the team at Petra Equipment. From the very beginning, the team has shown me a great deal of professionalism and experience in bringing my restaurant vision to reality [...] I would definitely recommend Petra Equipment to another who is looking to start out in the hospitality industry.

John and the boys from Petra Group have excelled themselves in fitting out our premises (The Local Burger Bar ) at Lugarno. We were referred to them because of there detail of work and there expert advise throughout the build was invaluable. The fitout was from scratch and all the tradespeople throughout the build were faultless. Many thanks Graham and Teresa.